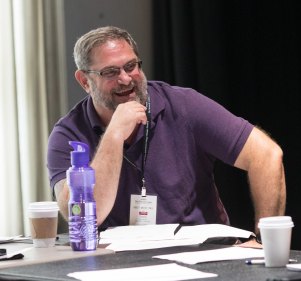 Dr. McTier has been an active participant in the Kennedy Center American College Theater Festival (KCACTF), and his production of LOST, an original piece about the effects of war on women, was invited to and performed at the 2004 Region 5 Festival in Denver. That same year, he was awarded a Kennedy Center Faculty Fellowship to the National Critics Institute at the O’Neill Theater Center, and he returned to the O’Neill in 2010 for the National Puppetry Conference. In 2013, he was awarded the Association for Theatre in Higher Education’s (ATHE) “Innovation in Teaching Prize” for Region 6. This past February, his production of Machinal was performed at the 2015 Region 6 Festival in San Angelo; for this production, he received a national award from the Kennedy Center as “Distinguished Director of a Play.” During the summer of 2016, McTier participated as a faculty dramaturg at the MFA Playwrights’ Workshop at the Kennedy Center.

Named to Who’s Who in America and Who’s Who Among America’s Teachers, he spent seventeen summers teaching gifted and talented high school students at the governors programs in Georgia (Governor’s Honors Program), Virginia (Governor’s School for the Visual and Performing Arts), and Missouri (Missouri Fine Arts Academy). Dr. McTier also taught high school for one year and continues to hold Texas teacher certification in theatre arts for grades 6-12. He also oversees all theatre majors at SHSU pursuing teacher certification.

Keenly interested in different lands and cultures, Dr. McTier has traveled extensively throughout the U.S. and to 40 countries. In 2012, he was a Fulbright Scholar to Kosovo, where he taught Aesthetics at the University of Prishtina and directed Njerëz Me Shresa Të Thyera (“Men with Broken Hopes”) at the National Theatre. Upon returning, he served a three-year appointment on the U.S. Fulbright National Review Committee for the Balkans. In 2016, he received an NEH grant to participate in the Summer Institute “American Muslims: History, Culture and Politics” in Washington, D.C. He currently is serving as U.S. Fulbright Scholar to Romania for the 2016-2017 academic year with assignments in Bucharest (fall term) and Cluj (spring term).